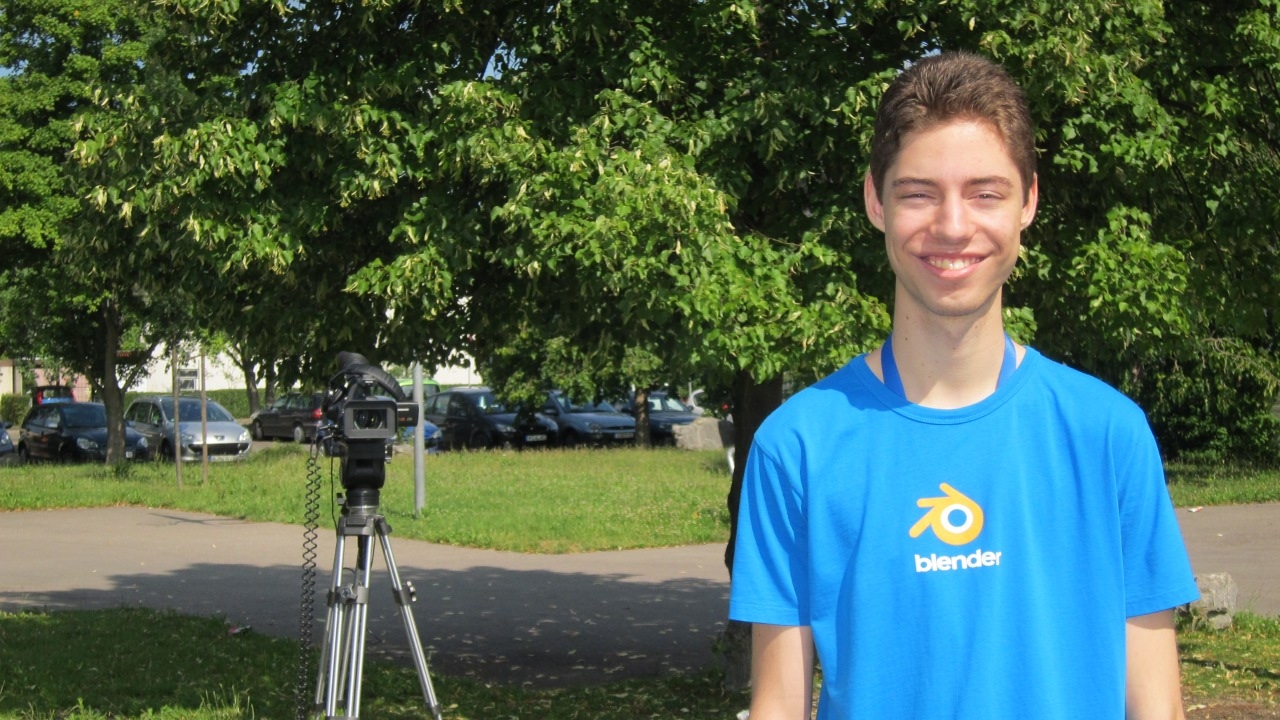 Thomas Dinges, better known under his nickname DingTo, has organized quite a bit of Blender events, like BlenderDay for three years in a row or this year for the first time the Blender booth at FMX. BlenderDiplom did an interview on how he got into Blender and his advice for people who also would like to organize Blender events.

At the moment we are live at BlenderDay 2011. It is the second day and the programm has just started. In the cafeteria the lunch bags for all those who cannot stay until the end are prepared. Thomas, tell us a little about BlenderDay!

We are hosting BlenderDay for the third year in a row. It all started in 2009 with the first BlenderDay for German-speaking Blenderheads. That was on the 19th and 20th of July. We are glad to have so many participants each year and of course we really enjoy all the people who have taken the long way down here to the southern part of Germany. This year we also have guests from Switzerland and the Netherlands and I'm glad that the BlenderDay could happen for the third time.

BlenderDay is a community-event for the German-speaking Blender users. What's the impact on the Blender community?

Blender has a rather big community. The German-speaking Blender forum Blend.Polis alone has more than 7.000 members. There is a very active community around the forum and we are proud to welcome a large part of it at BlenderDay. It's always great to meet in real life and not just over the internet. I think that's what a community is about - not just talking over the internet but also meeting in real life. To exchange views and get new ideas for projects, that's really cool each time. Blender is very diverse, you notice that when you watch the presentations here. There's everything. Starting from character modeling to detailed materials and of course something should not be missing: special effects like fire, smoke and explosions.

You have been active in the community for quite a while now. How came that you said to yourself: I'm going to organize BlenderDay?

This has quite some history. I got into Blender around 2007. I had just seen the first Open Movie, Elephants Dream, and found out about Blender this way. I also wanted to create animation films. But I found out that I wasn't that arty after all so I started to dig the technological part. From 2008 I helped development by reporting bugs so that the developers could improve the program. From 2009 I started coding on my own. Especially on the 2.5 project where I worked on the interface.

You are organizing quite a bit for the Blender community. Mainly real events, for example, you helped to get Blender a booth at FMX. Is there something you might want to tell people who want to organize a conference like BlenderDay in their own country?

Well, of course everyone is free to organize something like this and it is a lot of fun doing so. Of course it's always a small adventure when you are organizing something like this. You're learning quite a bit and you get a feeling for planning and managing because it's also a small mammoth project. Especially when you are offering housing and food, too. I think the main reason for doing something like this should be intrinsic motivation. You need to believe in it. If you think Blender is a cool program and want to popularize it, then this is the best way to communicate locally and organize something. So if you think "Hey, there are many people using Blender around here" - just go ahead and do it! Check for a location, that can be a hall or a school, and start organizing. Make it public on the internet. This way everyone should be able to pull something like this. For example there is a big community in Brasilia that is holding regular conferences for some years now and I think we also had one in America. I'd like to see the Blender community grow internationally with more real-life events like this.

Thanks for the interview and a prosperous future for further Blender-events brought to you by Thomas Dinges!